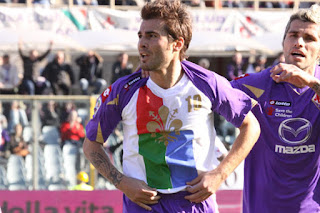 
There are not many players in the game of football who have quite as many problems as Fiorentina’s Adrian Mutu. Since 2004, he has suffered from a number of setbacks which include: testing positive for cocaine while playing for Chelsea; failing two drug tests within 10 days in January of 2010 while playing for Fiorentina, both after games in which he scored winning goals; and allegedly punching a waiter in the face and breaking his nose in October of 2010 only a week before his 9 month ban was over for failing the drug test earlier that year. (This is not the first time he has been in trouble for punching a waiter).

This year did not start out so great for Mutu after it was released in January that he was in direct contact with a high profile Romanian gangster currently on trial, and was involved in a rift with Fiorentina’s club President after he stormed off the training ground pitch around a month ago. In my opinion, the fact that Mutu has done all these things and is still playing is a testament to how important he is to Florence and how important Florence is to him.

Fiorentina coach Milhajlovic told the media last week that he is tired of hearing Mutu’s apologies and he needs let his work on the field do the talking. I would imagine that the situation involved a personal player-coach conversation where Milhajlovic told Mutu he is on his last warning and needs to win back over Fiorentina’s patrons and fans. Mutu responded heroically that Sunday, leading Fiorentina to a 3-0 win over a strong Catania side by scoring 2 goals and dribbling the ball down the entire field to set up the third. After Mutu scored his first goal, in an attempt to show his passion and commitment to the club and the people of Florence, he ran over to the supporters section to display the shirt he was wearing under his jersey. This shirt was white, green, red, and blue—the colors of the 4 quarters of Florence—with a huge giglio dorato (gilded lily, the symbol of the city) on top. The idea came from Florence’s historic game that dates back to the 15th century called calcio storico Fiorentino, although Mutu had his shirt custom made by a close friend.


After the game, Mutu dedicated his goals to Florence’s supporters and said that this city is part of him. In my opinion, Mutu belongs in the Florence, the city that adopted him after a long series of mishaps. Mutu may be a badboy but he is Florence’s badboy. “Where would I go if I didn’t stay in Florence?” he was quoted as saying after the game. The truth is, I don’t think there anywhere else for him to go and he is welcome here in Florence as long as he continues to play with the giglio dorato in his heart.
Posted by ISTITUTO EUROPEO INTERNSHIPS IN FLORENCE